DeeporBeel, also spelt DiporBeel, a freshwater lake, is located to the south-west of Guwahati city, in Kamrup district of Assam. It is a listed wetland under the Ramsar Convention in November 2002, for undertaking conservation measures on the basis of its biological and environmental importance.

The name DeeporBeel is stated to be derivative of the Sanskrit word dipa which means elephant and the beel mean wetland or large aquatic body in Assamese language, inhabited by elephants.

Deeporbeel is a permanent freshwater lake, in a former channel of the Brahmaputra River, to the south of the main river, and to the south-west of Guwahati city. It is a large natural wetland having great biological and environmental importance besides being an important major stormwater storage basin for the city of Guwahati. The beel has high floral and faunal diversity. In addition to a large number of residential water birds, the Deeporbeel ecosystem also harbours many migratory birds every year. Wild Asian elephants from Rani and Garbhanga forest are attracted to Deeporbeel. Their regular movement to the beel is recorded by forest officials.

The DeeporBeel is notified under Guwahati Water Bodies (Preservation and Conservation) Act, 2008. The notified area of the beel is about 6.89 Sq Km. Though earlier reports indicate 40 Sqkm of beel area, the current total wetland area is about 13 to 15 Sqkm.) 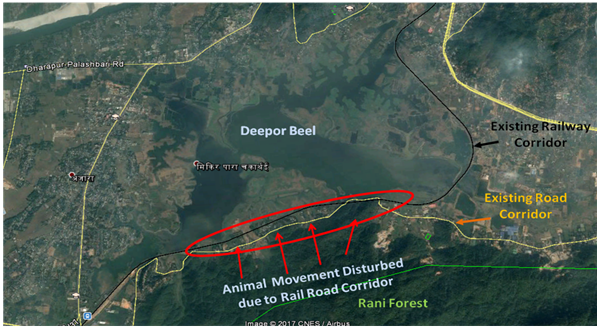